Customer Stories, Hut for Business, Hut I Can Build Myself

If you have a four-legged friend or two, you know how important they are to be part of your lives, and sometimes not taking them on holiday with you really tugs at the heart strings. Being a bunch of dog-lovers ourselves, we were delighted at Blackdown to create a shepherd’s hut for dog-friendly breaks.

Sue tells us their story, and why dogs on holiday are so important. 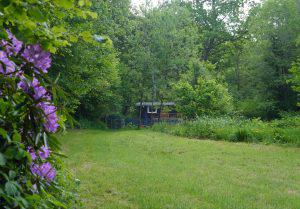 ‘We set up Raven’s Retreat two years ago after retiring from our picture framing businesses – Roger is 73 – I am 65.  Not wanting to risk being bored and missing the interaction with people I’d had running a shop for twenty years – we factored in Roger’s skill in woodworking and looked at the options!  Having a very hyper-active Lab/Collie (called Raven, of course!) excluded much travelling without him so why not do something so that others in the same position can enjoy a break with their dogs – troublesome or otherwise! 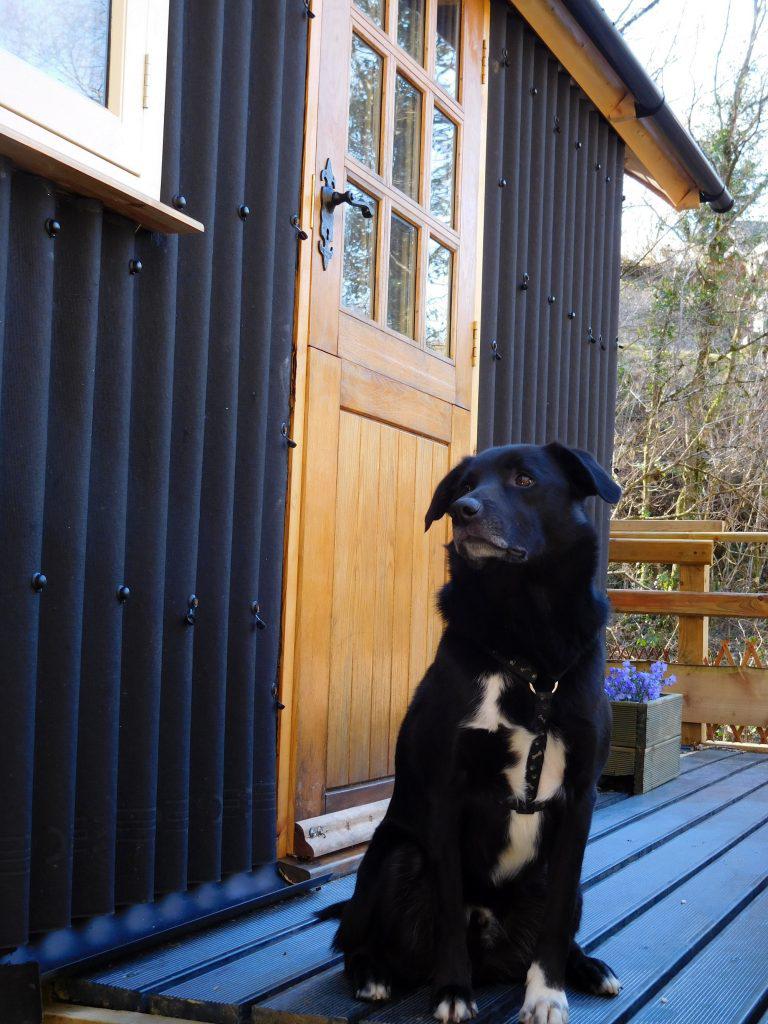 ‘Glamping was an option to give everyone, dogs included, so we wanted to create an outdoor break with a great deal of comfort, which is why we decided to have the facilities in/and attached to the Hut.  And living in Powys where there are more sheep than people, it seemed appropriate to choose a Shepherd’s Hut!

‘We wanted to do the work ourselves both to keep us occupied and to realise some equity on the project, so we were looking for a self-build Shepherd’s Hut.  That was when we contacted Blackdown Shepherd’s Huts and went to visit them.  It was a bonus that they are based near Taunton, where our son and his children live (Jamie our grandson has cerebral palsy, but this hasn’t stopped him representing Britain in wheelchair racing).  We received great advice and kindness from Will and his team and ordered a 16 foot Hut kit designed to our specifications which was delivered with great skill under difficult circumstances.  We’d had a month of beautiful sunny weather and the day before it arrived it started to rain and remained that way for a month!

We were very impressed with the quality of the kit and the ease (apart from a bit of swearing) with which it assembled.  It took us slightly longer than we hoped because Roger had broken his ankle a few months before and then he had to have part of his kidney removed!  But he was not going to be beaten and it is a credit to him and the quality of the kit that it has turned out to be so popular.  We have of course recommended them to those who show an interest in doing the same. 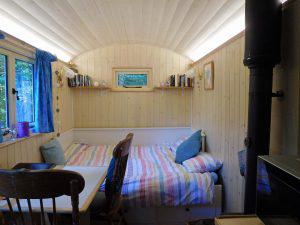 The insulation of the Hut (sheep’s wool of course!) is superb and the interior has a pull-out king size bed and a pull-out table to maximise the use of space in the one half with a log burner, and a kitchen area with sink, microwave/grill, kettle, toaster and hob and cupboard for odds and ends at the other.  The back door leads to the bathroom via the veranda with a covered way – so no getting wet!  Hot water is on tap in the kitchen area and in the bathroom which contains a mini bath with a shower and Villa compost toilet.  There is a barbecue in the garden and a breakfast table (weather dependent!) on the veranda.  The Hut sleeps 2 with the possibility of a mattress on the floor for a third. 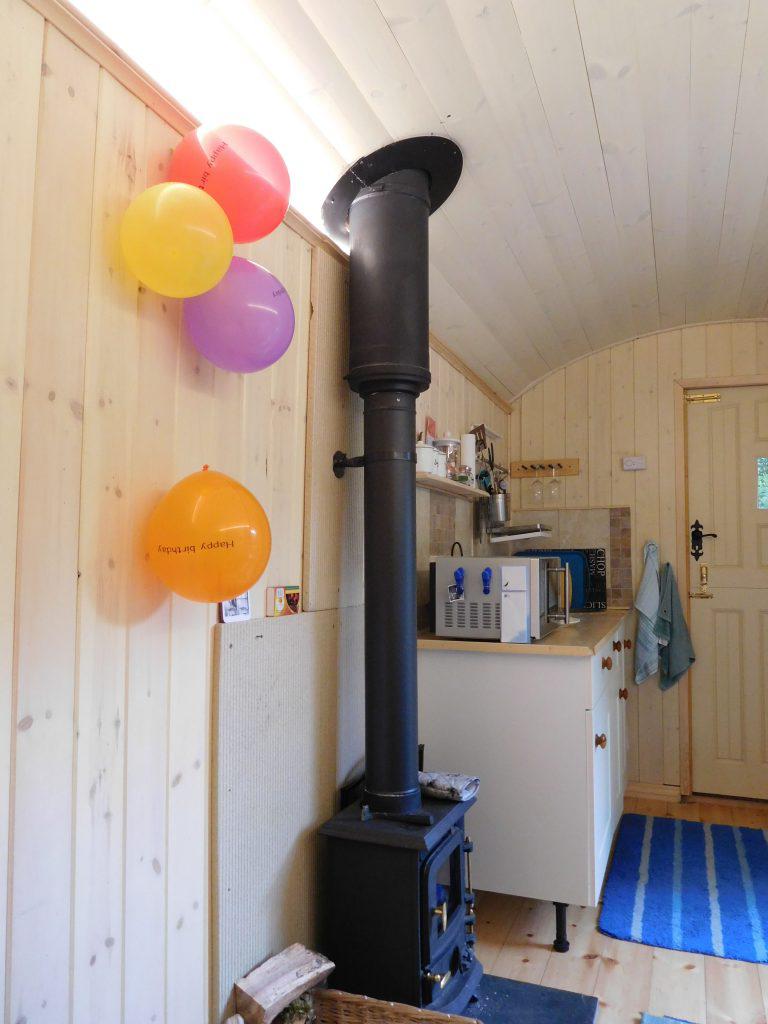 We started offering accommodation at Raven’s Retreat in June of 2016 and have been thrilled with the response and the great enjoyment everyone experiences (including being brought to tears by the beauty of the place!).  We do live in a very special place both for people and dogs and it’s always good to share we feel.  Out of the 122 bookings from June 2016 to March 2017, just under half of them brought a dog, or sometimes two, from chihuahuas to German Shepherds.  The rest were looking for a romantic weekend away or an anniversary/birthday treat – even a surprise engagement – and all loved the peace offered by the lack of an immediate mobile signal. 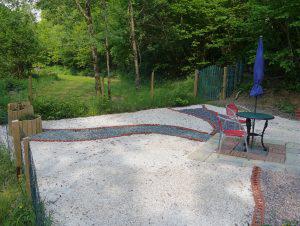 To add to the human/canine experience at Raven’s Retreat we offer a dog-sitting service and a dog proof garden.  There is a paddock attached to the garden where they can run and play freely and the Hut is situated in an ideal place right alongside a public Woodland Trust wood. There is a stream that runs alongside the Hut for those dogs that like water and the sound of which makes a lovely accompaniment to breakfast on the veranda.  There are so many brilliant walks in the area and dog friendly eating places and the beach is 45 minutes away.  The only restrictions are that the dog is not left alone in the Hut and the waterproof blanket provided is used on the bed.  Biscuits and treats are provided for the dogs as well as the human occupants.

We always give our canine guests a toy when they arrive – although Raven has difficulty understanding that the toys are not for him!  He embarrassed us greatly when Mojo, a very the handsome Labradoodle received a lovely blue dumbbell toy – for a while – until Raven stole it!  Just went straight into the garden and nicked it whilst Mojo was busy playing with the tennis ball he’d found in the wood!  As Mojo’s unearthed tennis ball was nearing the end of its life – we swapped it for a decent ball and Raven kept the dumbbell!

We had one young boxer, Lola, who had her palette smashed as the result of a totally unprovoked attack by a Staffordshire bull terrier when she was only thirteen weeks old.  Her owner took three months off work to nurse her back to health.  Another lurcher mix, Roo, arrived with only three legs as the result of being thrown against a wall – not once but twice!  The leg had to be removed the second time. Heart breaking to think anyone could do such a thing – but she’s now a very happy lass with a loving couple and could nearly outrun Raven who has a fair turn of speed. 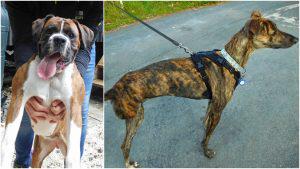 Love your dog, love your holiday

It’s been great meeting such a variety of dogs.  In order to try and cope with Raven – being the most difficult hyperactive pup I’ve ever had – I took a couple of courses in Dog Behaviour which were fascinating.  So it was good to be able to hand on some advice to people and observe the dogs’ reactions.  It is good to realise that most caring owners go to dog training classes which makes for a much more enjoyable experience with their dogs and those they come in contact with, particularly on holiday.

We hope to see you and your four-legged friends soon!

← The Beautiful Business of Shepherd Huts One Happy Guy! →

We use cookies to ensure that we give you the best experience on our website. If you continue to use this site we will assume that you are happy with it.OkRead more